There are currently no items in your shopping cart.

Three-time national winner of Bourges, and of many national, provincial,
regional top prizes and promoter of Daflor!

Since 1990, Karlo Van Rompaey has been active in the pigeon sport. At the age of ten years he took care of and played with his own pigeons. Because of the many hours he spent as a young boy in the lofts, he has gotten an incredible
feeling in the assessment and caring of pigeons. This characteristic becomes an advantage for Karlo, who in 2004 graduated as a veterinarian.
Karlo always tried to surpass his boundaries in the pigeon sport. As such he evolved from a speed player into a modern heavy-middle distance practitioner. Already from the beginning his approach resulted in victories in several regional results and championships. As a youngster he was crowned several times with the golden Dove award-winning Junior Benelux. Later on, followed nice provincial victories including the well-known Limburg flight for the benefit of fight-against-cancer in which he beat more than 17,000 pigeons..

The great dream of the young boy from Sint-Truiden, however, was to win national Bourges. That is why his focus turned as of the turn of the century more and more to the national races. Meanwhile, this passionate breeder gained a national and international reputation during these flights. He managed to win the national Bourges as many as three times! In 2005 a first time with 'Jos' and in 2015 he managed it twice with 'Prima Dora' and 'Hat-trick '. Three phenomenal victories that overshadowed all other performances. They prove that the vet-pigeon breeder from Sint-Truiden knows what he's doing. 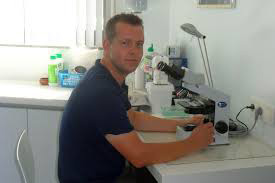 As a veterinarian also he is responsible for follow-up and guidance of a number of top lofts.

Several among them already tasted also national victories and championship titles.
Just as in his career as a pigeon breeder, his professional approach and vision also evolved in the guidance of racing pigeons. 'It's about bringing out the intrinsic quality of a pigeon fully by keeping them healthy, training them properly and giving them adequate support during their physical efforts. The better the pigeon and its metabolism are developed, the easier they stay healthy, the harder they train, the more efficient the taking in of crucial nutrients will happen. This all results in better performance, better moulting, better breeding,...

The unique operation of DAFLOR will therefore be a special step forward in the modern pigeon sport in which a lot is demanded of our athletes and where details make the difference between winning and losing, said Karlo.

The results that we see after using DAFLOR are in this whole aspect fantastic. This, a unique product in the pigeon sport, creates an optimum intestinal flora and increases the
resistance of the pigeons.

The pigeon sport has known a huge evolution the last years. The pigeons come much better prepared at the start of the national races. In terms of both training and medical supervision and in terms of nutritional support, a lot of progress has been made. Thanks to the fact that we approach the pigeons as true athletes, we see a much smoother course of the races. The duration of a race is significantly lower than it used to be. The difference between winning and losing is often minimal. We also note that the increased race rhythm and sequence of heavy flights is more and more feasible for the same pigeons. From my experiences as a pigeon breeder and my experiences as a veterinarian I dare say that the development of the pigeon is the decisive factor. Pigeons that quickly heal from child diseases, get administered little antibiotics and who digest the offered nutrients and convert them efficiently thanks to a good metabolism will develop better. These pigeons have a greater feeling of hunger which makes them eat more, absorb more energy and thus become more powerful. They train harder and are prepared quicker for the races. They recuperate faster making them more competitive quicker. 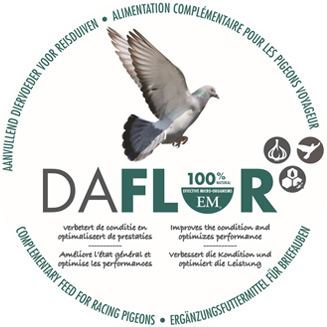 DAFLOR is a huge added value for the modern pigeon sport. This product in which EM (effective micro-organisms) is processed, customised to the pigeons are a must for any enthusiast.

Daflor is a unique EM extract in which the lofts no longer need to be sprayed to achieve the same result.

Specially developed for pigeons and based on EM experiences worldwide, of fresh garlic and unprocessed honey which are fermented according to the EM technology. Because of this biologically very complex fermentation process, Daflor is rich in different metabolic products such as organic acids, natural vitamins, enzymes, bio-active substances, pre and probiotics, etc. and so we obtain an exceptionally powerful 100% natural condition – health – immune stimulating extract.The longer one uses Daflor the stronger the pigeons, and certainly the offspring, will become.